I don’t venture into politics much here but this story is a fascinating mix of sexuality, religion and politics. Mitt Romney is apparently putting out feelers regarding the GOP presidential campaign. The issue in blogdom is “Can a Mormon win?” Hugh Hewitt, Christian conservative who knows Romney, believes he can and is supporting him.

I think Romney will need to do something fairly quickly to be conservative enough for the Republican base if he is to be successful. With his stance in 1994 on gay rights, I think he will get a chilly reception. Will there be a winter surprise for conservatives from the Romney camp? What I mean is, will he feel the need to do something in the area of gay rights to find his inner social conservative prior to lining up serious conservative support? I doubt the Mormon issue will be as much of an issue as his potential duplicity in saying one thing while running for Senate and posturing another way when seeking the GOP nod.

National Review Online printed my review of the book Unprotected this morning. 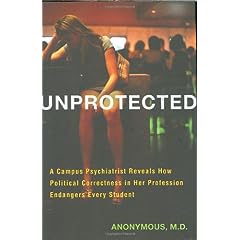 “I believe that Jim McGreevey is bisexual.” – Golan Cipel

I have been reading McGreevey’s book and if he is lying, he is good at it.

What do you think? Cipel or McGreevey?

One of my all time favorite songs. The lyrics are challenging and the music is layered well with great dynamics. Actually, the whole Beautiful Letdown CD is a must listen.

Title: Fraternal birth order and ratio of heterosexual/homosexual feelings in women and men.

I haven’t seen the full report as yet, but will update when I do.

To me, this means that straights need the CDC information and some gays do not engage in anal sex (although they need the information as well). Assumptions that all gay males do this routinely, while often correct, are not always true. Frequency of such activities and with whom are important factors for health care professionals to ask about and they are the determinants of disease, not sexual attractions per se. My view is that sexual promiscuity in gay men owes more to being male than being attracted to the same sex. Of course, this is not proven but it fits my clinical experience and observations better than assuming the reverse.

There are people of both sexes and all sexual orientations who are at high risk for acquiring and spreading STDs. These individuals often have significant emotional needs and profit from interventions that are individually suited to their needs.

Take away point: People who do not manage their intimate lives well are at higher risk for disease and emotional distress than those who do.

This article by Kathleen Melonakos from the NARTH website was recently reprinted by Lifesite News.

While I think it is important to advocate for healthy sexual conduct, I do question the sources and some of the conclusions of this article. I did not check everything but a few things seem important to note.

First, the article quotes the discredited work of Paul Cameron and relies on his conclusions based on questionable assumptions. One popular response to his work notes the problems with sampling and inference in his articles.

Also, Ms. Melonakos says: As far as I know, there is no other group of people in the United States that dies of infectious diseases in their mid-forties except practicing homosexuals. The evidence for this statement is in a footnote that leads to the 1997 article by Hogg et al that has been widely reported. The finding often quoted that is generalized to homosexuals as a group is:

Rarely do sources that cite the Hogg et al study or that simply assume a mid-40s life expectancy then cite the follow up letter from Hogg et al where the authors provide context for their research. It is important to read this letter to understand the significance of their findings. In this note, they state:

In contrast, if we were to repeat this analysis today the life expectancy of gay and bisexual men would be greatly improved. Deaths from HIV infection have declined dramatically in this population since 1996. As we have previously reported there has been a threefold decrease in mortality in Vancouver as well as in other parts of British Columbia.

It is essential to note that the life expectancy of any population is a descriptive and not a prescriptive mesaure. Death is a product of the way a person lives and what physical and environmental hazards he or she faces everyday. It cannot be attributed solely to their sexual orientation or any other ethnic or social factor. If estimates of an individual gay and bisexual man’s risk of death is truly needed for legal or other purposes, then people making these estimates should use the same actuarial tables that are used for all other males in that population. Gay and bisexual men are included in the construction of official population-based tables and therefore these tables for all males are the appropriate ones to be used.

Ms. Melonakos then notes the psychiatric criteria for viewing a syndrome as a diagnosis. The behavior or syndrome must cause subjective distress and/or negative social/life consequences. She asserts that homosexuality satisfies these criteria because many gays are unhappy with their sexual orientation and being gay is a “lethal addiction.” First, the DSM does include a diagnosis for those who are in distress over their sexual orientation (302.90). Second, the evidence is not clear that simply having same-sex attraction or taking on a gay identity requires one to pursue practices that do indeed lead to shortened life or disabling disease. I have previously addressed this issue relating to mental health morbidity.

In short, I do not believe the article makes the case for considering homosexual attraction per se to be a psychiatric disorder. Disordered sexuality of any sort (many partners, risky behavior, comcommitant drug usage, etc.) can be treated under several diagnostic headings, whether the person is gay, straight or bisexual.

More on this article. In it, Ms. Melonakos asks: “Can anyone refute that increased morbidity and mortality is an unavoidable result of male-with-male sex–not to mention the increased rates of alcoholism, drug abuse, depression, suicide and other maladies that so often accompany a homosexual lifestyle?[v] People with this whole cluster of behavior patterns are somehow “normal”?”

This is pretty easily refuted by observing people who engage in male-to-male sex but do not have these disorders. Even in studies showing an increased risk of the disorders cited here, the majority of people studied do not have them. Somewhat, and in some cases, very minor, elevated risk, yes, but “unavoidable” incidence? No. Research does not show that increased morbidity and mortality is an unavoidable result of male-with-male sex.

UPDATE (12/19/06) – NARTH Board member Dave Pruden tells me that the NARTH Scientific Advisory Committee is reviewing this article for accuracy.

1/4/07 -This article has been pulled from both the NARTH and Lifesite News websites.

Given our discussion of gay culture, is there something to the idea that gay leaders should be more vocal about promiscuity? That sounds provocative but I mean it to be a serious question. Feel free to comment on any aspect of this controversy.

While I believe the research points to the potential influence of environmental factors broadly speaking, I think the Lifesite article overstates some of the findings.

Mrs. Nicolosi correctly notes the population size – 2,000,355 native-born Danes between the ages of 18 and 49 but does not clarify that the research did not examine childhood correlates for the unmarried Danes. For gays that would mean that the study examined social factors for the married gays or about 1-5% of the gay population in Denmark (n=1890 men; n=1573 women). The study is still quite large but conclusions cannot be generalized with certainty to unpartnered gay people.

In reading the Lifesite article, one could get the impression that gays and straight were directly compared and interrelated. In other words, if homosexual rates of marriage go up then heterosexual rates go down. Not necessarily so. The childhood correlates were independently compared to gay and straight marriage decisions. People with unknown fathers were indeed less likely to marry heterosexually (“Men and women with “unknown fathers” were significantly less likely to marry a person of the opposite sex than were their peers with known fathers”) but there was no significant relationship between unknown fathers and elevated homosexual marriage. Reduced heterosexual marriage rates do not necessarily mean increased same-sex marriage. I do not think Mrs. Nicolosi’s article is clear on this point.

Another point that is misleading from the Lifesite article is this bullet point: “Men whose parents divorced before their 6th birthday were 39% more likely to marry homosexually than peers from intact parental marriages.” While this is a true finding, Mrs. Nicolosi does not report that there were only 35 men in this category and that the difference in marriage rates between this group and the comparison group was not statistically significant. Thus, although true, one cannot attach much importance to it.

It is also relevant to point out that nearly 83% of the gay men in the study did not experience parental divorce prior to their 18th birthday. Thus, the vast majority of these men enjoyed intact families through their childhood.

As I read the study, there are several provocative findings, including:

1. The fraternal birth order effect did not show up, 2. Cohabitation is correlated with higher probability of marrying homosexually, 3. Divorce has negative impacts on marriage rates for staights, and 4. Elevated rates of homosexual marriage are associated with being born in a metropolitan area versus lowered rates if you live in a rural area.

UPDATE: 1/3/06 – Warner Huston has posted an article about this study on several conservative websites. He draws heavily from the NARTH article I reference above. My comment about his piece is here.